And just like that, I have a child in kindergarten. It’s been coming for five years now, and yet it snuck up on me. I’ve tried to downplay my anxiety as I got String Bean ready these past few weeks: new backpack, new lunch box, new school clothes, a list of menu ideas for her lunches. She was either really good at downplaying her anxiety, or she simply didn’t feel any. She was excited, every time we talked about it, to make new friends, learn new things, experience a new school. Today was the big day. As I got her ready this morning, she was too wrapped up in a game with her sister to care what her lunch box contained (as long as her new princess water bottle was inside), or how I styled her hair, or what shoes she was wearing. She had no questions or concerns at all.

As we walked String Bean to her class, she took in all of the kids and parents around her with cool nonchalance. When her teacher appeared and asked the throng of kids to line up, and was ignored by the lot of them, String Bean stepped right up. She led the way to her new class, her classmates trailing behind her, without the least bit of apprehension. Now, three years ago, this girl’s preschool teacher had to pry her off my arm, leg, or ankle every morning for weeks. And it’s not that I wish she’d been emotional today, I’d much rather watch a confident girl sauntering into class than a sobbing wreck being wrenched from me, it’s just that now I realize how much she’s grown up. She isn’t my scared little girl anymore. She’s her own girl, off on a new adventure, without looking back. Really, the only drama of the morning was Peanut getting upset because she wanted to stay and play with the big kids on the cool new playground.

When we picked String Bean up from school I could tell she was tired, from the triple-digit heat wave with a non-air-conditioned classroom as much as the long day of newness. She smiled and said her day was good, that she played with some new friends, made a necklace (this teacher really knew how to win her over), and enjoyed circle time. She said some kids were sad and missed their mommies, but that she wasn’t sad at all. Her carefully packed lunch was missing exactly one handful of blueberries, so I fed her a late lunch and watched her play with her sister and marveled at how easy this transition was for her.

The thing I marvel at most is that, even though people always tell me how much she looks like me, she’s nothing like me. I was cripplingly shy as a child. I literally never spoke in preschool, saving up an avalanche of words that I dumped on my mom and sister as soon as they picked me up each day. One of my preschool teachers actually asked my mom to record my voice for her, because she wondered what it sounded like. I remember kindergarten as a terrifying onslaught of bossy girls and aggressive boys that I had to navigate to keep up my comfortable silence. I remember being kept after school so the kindergarten teacher could try to finagle me out of my tight shell. I remember being stressed and anxious and watching the clock until the day was over. I also remember finally starting to talk, making friends, and getting to the point where I actually looked forward to school. But that took a while. I’m glad that String Bean doesn’t have any of that timidity.

I know the year is young and there’s plenty of time for setbacks, but I also know that the tearful, clingy child she once was is gone. Now she’s the cool big sister, with the big girl school and new habit of rolling her eyes and saying “Mooooommmm!” when I embarrass her by acting like I care too much. She’s still plenty cuddly, wanting me to lay in bed with her each night telling her stories as she winds down for sleep, but that’s different than trying to kiss her goodbye while she’s in line for class.

Onward, little one. You make me proud. Enjoy the adventure. 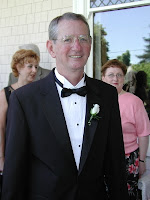 Last weekend, the girls lost their grandpa, my husband lost his father, and the whole world lost a kind soul who loved to help people. It’s a huge loss, and it’s been a tough week, of explaining concepts like death and cancer to Peanut and String Bean. I think String Bean has a better grasp on it, the death part at least, but for Peanut, repetition seems to be key. “Why did he die?” is one of her top questions, followed by “Will you die?” It’s hard to keep giving answers when there are no good answers, just repetitions of the facts: grandpa is gone, and he loved you girls very much.

He was the proudest of grandpas. My husband has found, while he’s been back in his home town, that everyone, even people we’ve never met, knew all about Bill’s granddaughters, had seen countless pictures, heard all the stories, knew how much they meant to him.

They are so young to have lost him, and I hope they’ll remember him: the weekly web cams and the visits and the trips together, like the one just last month, when we all went to Myrtle Beach together, and Bill watched the girls dig in the sand, jump in the waves, collect shells, and practice swimming in the pool. Maybe that’s one reason they are struggling with the news. They just saw him, spent a week with him, how can he be gone? It’s the way we all feel.

I know there will be many more questions to come, many more repetitions of the facts, and lots of sad times as we remember and try to move forward, but I hope that, most of all, the girls remember how much he loved them, his bottomless adoration of them, his admiration for each new skill they acquired. We should all be so lucky, to have love like that in our lives, however long it lasts.

This week I have transmitted my love of sharks, angel hair pasta, and tarot cards to my children. It’s amazing to see how excited they get about the things that make me excited. It makes me feel like I can fill them up with whatever I want them to appreciate, but it also makes me feel like there’s an enormous responsibility here, to fill them up with equal parts of all things, so that they will find their own way, and learn to appreciate the things I myself don’t get particularly excited about. But then again, they are most excited by anything and everything princess-related, and I’ve never had a moment of adoration for that stuff, so maybe I’m already off the hook.

Posted by Unknown at 6:33 PM No comments:

Bring on the Fours

The trying threes will be over in two months! I know the fours, especially with girls, can be a testing age as well. I’ve been through it once with my sweet little String Bean: the attitude, the sass, the first stinging comments, those “if you don’t do this then I won’t be your friend anymore” type remarks, and even the occasional “I hate you!” when she was good and mad at my rules. But, in my opinion, the threes are a special brand of difficult. The other morning Peanut, my happy, smiling girl, threw a rather spectacular tantrum because I put on my panties before asking her which color I should wear. Now, since she’s never shown any interest in or opinion on my underwear before, how was I supposed to know she cared to choose them for me that particular morning? I’ll tell you how: because she’s three.

Peanut’s will is unlike any I’ve seen before. And I’ve known some ridiculously strong-willed people. I can even be one of them when the occasion calls for it. But nothing really prepared me for the uncompromising stubborn nature of my little cherub. I have a healthy respect for her obstinate streak, and think it’ll serve her well in life. I’ve always felt like she came into this life knowing exactly who she is, and it’s more my job to figure out who that is than to bend her to any standards I might cater to. String Bean is more likely to follow my lead, to want my approval, to adapt to me without even knowing she’s doing so. Peanut, loving as she is, really isn’t that concerned with pleasing me. She’s a good kid, epic tantrums aside, smiley and quick to share and eager to befriend everyone, so I figure the stubborn streak balances her out a bit, keeps her from being a pushover. I’m sure being four with that iron will is going to be a bumpy ride for both of us, but it’ll be a nice change from these threes of thrashing tantrums and screaming fits of misdirected rage over things like someone else’s underwear color.

Posted by Unknown at 9:37 AM No comments: